Belgrade Foam Fest is the most spectacular musical and theatrical event in Belgrade. It was founded in 2009. Since then more than 60000 people visited the festival. Innovative, modern theater, audio and video equipment, lasers, acrobatics, live performances and unique spectacle with lots of foam and foam foampads guns are only one part of this 12-hour-long festival.

World most famous DJ`s  of today, such as Antoine Clamaran, Tom Novy, Cristian Varela, Benny Benassi, David Morales, Axwell, Sebastian Ingrosso, Sandy Rivera, Stereo Palma, Tsuyoshi Suzuki and others, have described their performances on the BGD Foam Fest  as the most original moment in their career.

This year, on 1st September, Belgrade will have the honor to present its fourth BGD Foam Fest. Belgrade Arena gates are opened on first September from 20h, and will be closed on second September at 8am. Line up for the fourth BGD Foam Fest will surely be remembered as one of the most exclusive, which will exceed the expectations of many fans of top club music. 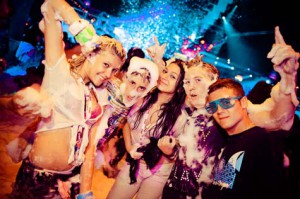