Visiting our beautiful city? Get to know Belgrade Gay Guide. There are a few places in Belgrade exclusively designed for LGBT crowed, in every single one of them (on the list bellow) straight people are welcome to. Among those places there are few that are Gay Friendly.

We decided to write this article, so that you girls and guys will enjoy Belgrade to the fullest. Here is the Belgrade gay guide:

Šupa on English ‘Shed’ is a cute cafe in the downtown of Belgrade. Legend says that it got a name because owner of the place liked to hang in a Shed when he was a kido. Its a Gay, Vegan and pet friendly place. Great place to teem up with locals and Expats. No place for parking around. Our tip would be to Take a walk or use a taxi. Looking for fun and dance? This is the place for you then. They say that they are first Belgrade straight-friendly place. Hehehe. This place is a Splav actually. Yap, famous floating boat club located on the river Sava. This place host parties every weekend. Music depends of promoters that host an events. Check them out. Small LGBT cafe bar in Belgrade. Smiley Bar is a coffee place during the day and cocktail place in the after work hours. It gets busy all week long.

Club Musk is the Downtown located LGBT Club. On the Nightlife market since 2014 and working well since the day 1. Mostly younger crowed hang over there. Special events on weekends and karaoke nights on Wednesdays.

This club is among the oldest Gay clubs in Belgrade. Music choice is quite interesting. Pop and house till 3 am. After 3 Dj spin Serbian turbo folk music.

Belgrade Gay Guide. During the day XL bar is more than just a pleasant bar for a coffee lovers – it is also a place to relax or recharge your energy, place for a business meeting,  or a quick espresso break. When the night falls down, XL bar goes under complete transformation, and turns into a real nightclub and a place for a great night outs! Check them out.

It is a small but cozy coffee shop settled in the heart of the city. With a modern interior in black and green tones it spreads on two levels, a ground floor and a gallery. During the weekends this lovely cafe turns into an awesome small Gay discotheque in Belgrade.

Great club which is working only on weekends! Theme parties are on the menu on working nights, which is A only gay club with this type of the events.

Is There a Gay Neighbourhoods in Belgrade Serbia?

Looking for a Gay Neighbourhood in Belgrade Serbia? Nope, there is none.

First successful  Pride Parade was organized on 10th of October 2010., at 10 o’clock, and start point was park Manjez in Belgrade. There were more than 1,000 participants of  Parade. The meeting was opened by the Head of the EU delegation, Vincent Degert. Participant of the first Belgrade Pride Parade were also Minister for Human and Minority Rights Svetozar Ciplic, Head of Delegation of the OSCE Ambassador Dimitrios Kupreos and the Council of Europe in Serbia Konstantinos Jerokostopulos. The event was attended by many well known people from political and public life in Serbia. 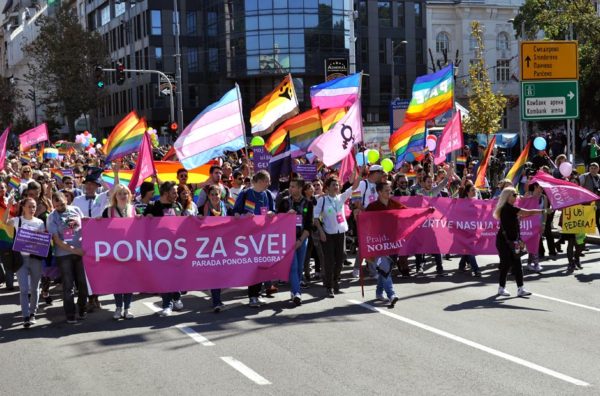 Click here to find out about some popular Belgrade bars where to  go for the pre-party. Hope that this small Belgrade Gay Guide helped you a bit. Have alot of fun in Belgrade!