Kafana is a traditional tavern or better to say Coffee House that has been brought by Ottomans ( Turks ) Back in 1951. That year, Belgrade has been Concurred, and has got its first Kafana. Kafana back then use to serve Turkish Coffee, nowadays, Kafana is place where u can listen Serbian Turbo Folk and National live music, place where you can eat traditional Serbian food, and drink Rakia. Prices in Kafana are way more affordable then in the popular Belgrade Clubs. Some Kafanas work all week long as restaurants, and around 10 pm they become place where the locals are hanging around and kind of dance and sing songs together. What Its really interesting is that some of Super Proud Locals love Kafana, love Turkish Coffee and love to Travel to Turkey for a Holliday, but on the other hand they don’t like people in Serbia that changed religion and become Turks during the occupation of Serbia by Turks, that has last for more then 400 years. 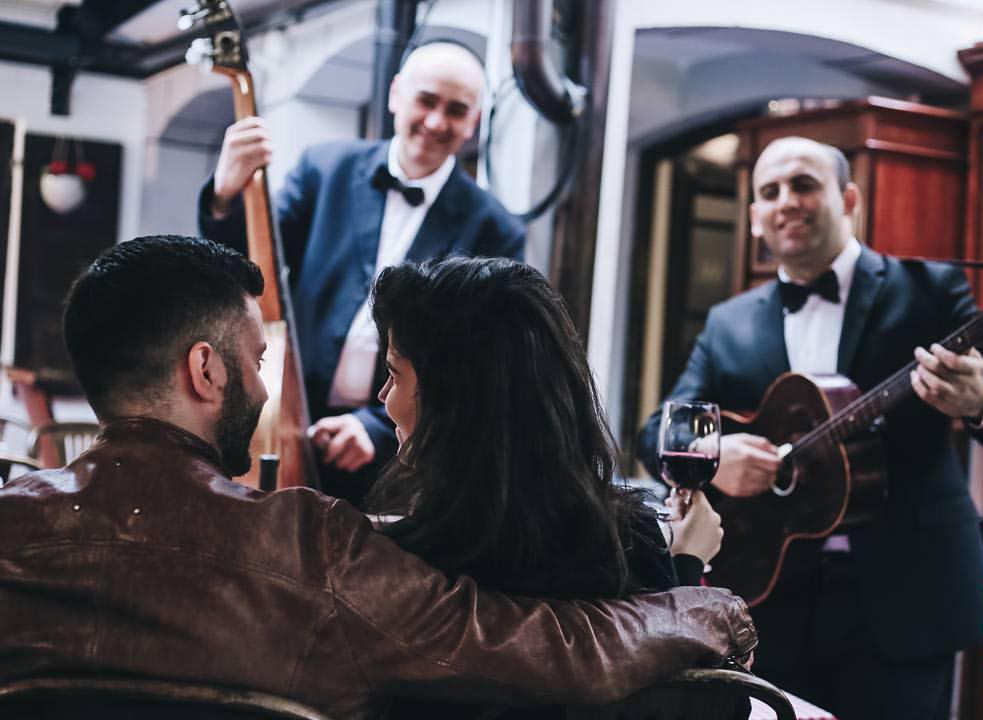 Trough the history Serbian Kingdom was always standing among first ones opposite to the powerful armies that wanted to concur Europe. Ottoman Empire that almost changed European demographic history and religion, has been stopped by the Serbian army by killing the Sultan Murad himself. After that, Ottoman Empire never had enough strength to go and to finish the plan of concurring the whole Europe. On the another hand Serbian Kingdom was under occupation for more then 400 years. One of the things that Ottomans brought to Serbia was Turkish Coffee, and set up of the first Kafana.

In Kafana For 5 Euros you will get

Get bend to sing only for you, for a just 5 euros per song. EPIC right?

You can choose whatever u want, off Corse it has to be local song, or at least from the Ex Yug. If you are planning to take a local date to Kafana, make sure to plan it in advance. You have to make sure to be on time, to reserve your table and to spend for the table as per table requirement. Good thing is that your partner will love your invitation to the local place. Try to learn some Serbian words, local people will really appreciate it that.

When it comes to the nightlife, we have so much to offer. Underground artists that took over old factories and made Art Galleries and hips of epic venues. Then the popular Mainstream Clubs that offer Vip tables and the most amazing decorated venues and sound systems, also the most beautiful party girl attenders. Big Techno places, with 10-20 k people dancing on open air till 8 or even sometimes 9 am. Underground places or Belgrade Underground Splavs, where you can only enter if you know the code for that particular day.

Each night in a week is reserved for a certain place. Where to go?

Dear lord, there are around 500-1000 Kafana in Belgrade, of Corse some of them are Posh places where you want to go, and some are local “ Birtije “ which means, you should not go there. Birtija is place where local people come to drink and smoke and do bla bla bla chats with other people with similar interest. On Birtija places you will only find trouble or old drunk people that are keen to chat forever about History and Sport, if the speak English.

“Good Kafana “ or better to say, Posh or Fancy Kafana venues, are run by the popular Local trendsetters.  They are able to bring good bends and to make a really good party. At the Good place you will party like never before. Very Often people are dancing on the tables, hanging and kissing tree times. Most of the body gesticulation is done by holding arms in the air, not so much legs movements, like in all other Venus or party occasions.

Definitely while you are in Belgrade, you have to check out this. Foreigners just flip out after their first experience. Good to know is that prices are 50% cheaper then in the popular Belgrade clubs, and reservation of tables is necessary, while entry is FREE of charge.

Party Hard and make sure not to drink TO MUCH!