The first mural in Belgrade has been painted back in 1970, by the Lazar Vujaklija. The expansion of murals was experienced in the mid- to late 80’s. One of the most popular murals, located  in Rajiceva street, was created in 1984, to mark the 25th May, and the author was professor Cedomir Vasic with a group of students of the  Faculty of Fine Arts.

In organization of The Center for Urban Planning and Development of Belgrade (CEP) in 1982, there has been a meeting called “Communication” on which was for the first time raised an issue of murals as a way of decorating facades in Belgrade. In 1983. prof. Cedomir Vasic  with a group of his students gave a map with 50 conceptual designs for the murals to the former Mayor of Belgrade. Then, Council of the Belgrade’s Assembly in 1989. adopted the Operational Plan for the development of the city, in which for the first time, in an official city document, were mentioned murals as a way of painting the city’s facade.

Then, in 1989, in honor of the 9th Summit of Non-Aligned Countries, held in Belgrade, five new murals were painted. They were financed by the former countries of Yugoslavia, as a gift to Belgrade. The organization was entrusted to the Institute for Protection of Monuments.
Today, the city authorities in Belgrade have a positive attitude regarding the issue of street art. In this moment there are several ongoing projects off new mural paintings, especially on buildings whose facades are in the process of reconstruction. We hope that this attitude will remain in force.

The most popular Murals in Belgrade

Mural is painted in 1984 for the occasion of the celebration of 25 May, organized by the City of Belgrade Conference of Youth Alliance in collaboration with Jugobanka and Komgrap. Renovated in 2000. Located in the corner of  Rajiceva and Knez Mihailova street, on the facade of the building of the former Jugobanka. 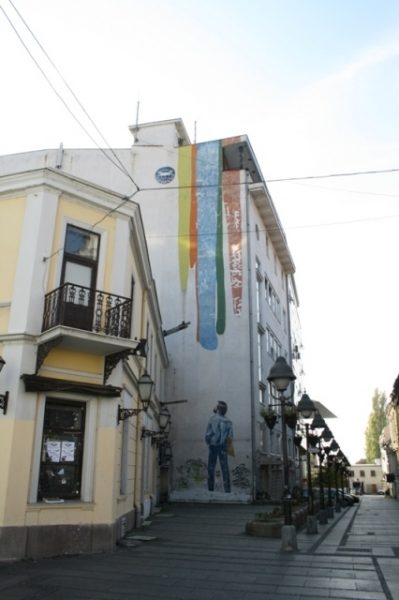 Mural is made in cooperation of Conference of Municipalities and Towns of Yugoslavia and the Institute for Protection of Monuments in Belgrade in 1989.( for the honor of 9th Summit of Non-Aligned Countries). It is located on a plateau of Faculty of the Philosophy. 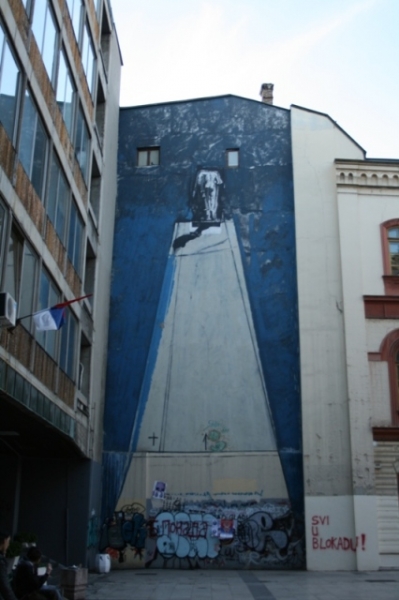 This is one of the newest murals in Belgrade, done in 2016. It is located at Bezanijska Kosa (municipality of Belgrade) and it’s dedicated to 2 of the most popular sportsmen of today in our country, Milorad Raduljica and Novak Djokovic. This mural is the work of architect and muralist Andrej Josifovski also known as the ” Pianist”. This artist is among very well known muralist in Belgrade.

Here are more murals by this remarkable artist: 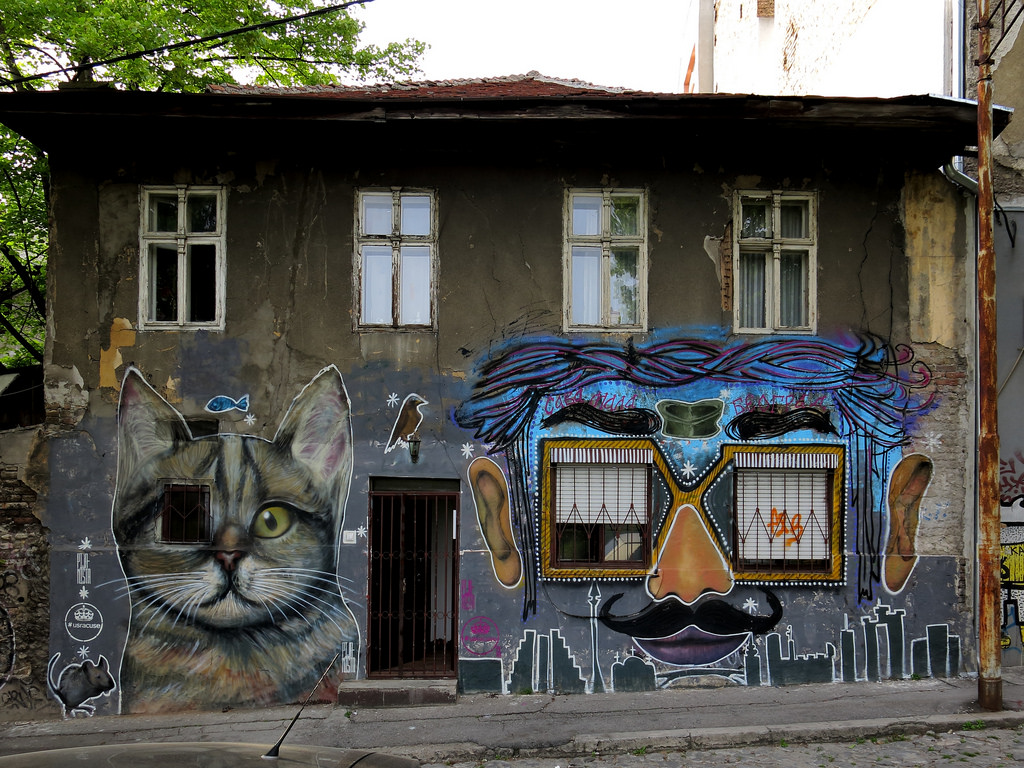 Nevercrew is the artist duo from Switzerland (Christian Rebecchi and Pablo Togni), who stopped in Belgrade in 2014. Time spent in the capital, this duo used to make interesting wall painted mural depicting a massive blue whale. Otherwise, the whale is often a motive mural signed by Nevercrew, which is like some kind of their trademark. It is located in ex Mixer House building which is now hosting one of the most popular clubs in Belgrade, Hype. 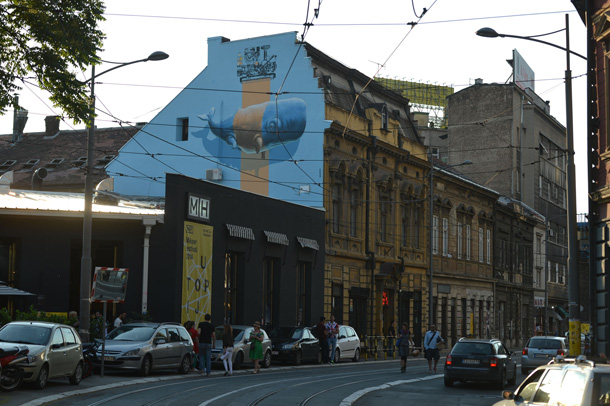 Under the experienced hands of another street artist,this mural can be found at the wall in Pop Lukina Street. Blu is the pseudonym behind which hides an Italian artist who paints the walls all over the world since 1999. He visited Belgrade in 2009, when he left his mark on a wall. 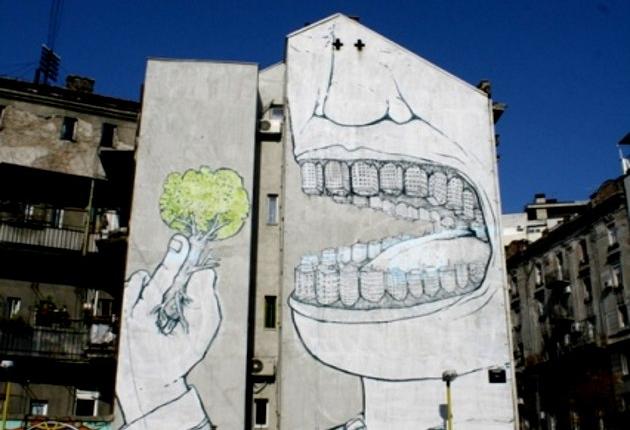 Particularly interesting is the story of this mural from Karadjordjeeva street panted in 2008.,  by the French street artist Remed and was called “Lady of Belgrade”. The Frenchman was so fascinated by our capital and the fact that more than 30 times was destroyed to the ground and raised from the ashes every single time. Saint on the mural between legs has an egg, a symbol of life, in one hand white flag – symbol of peace, and in the second one – weapon. 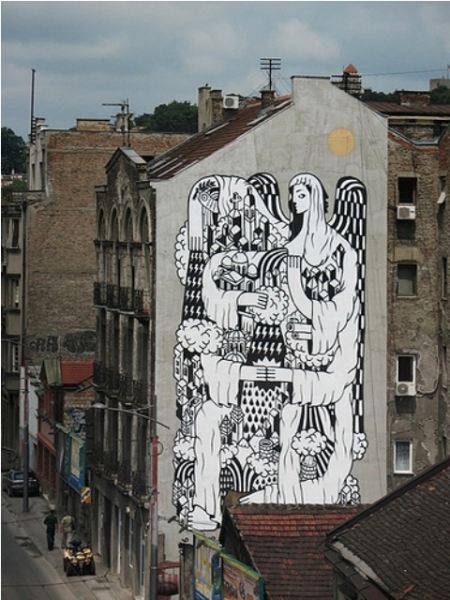 Located in Savamala district, also in Karadjordjeva street, this beautiful mural is a part of Savamala Promenade. It is located on the pillar of the Sava Bridge. Authors are Marija and Stevan Soln which they named “Zamisli zelju” (translation: Make a wish).

One of the most popular muralist in Belgrade is the lady with a pseudonym “Kraljica Vila”. She represents herself as a freelancer, and the art is her everyday job. You can find her murals around Belgrade, and here are some of her work: 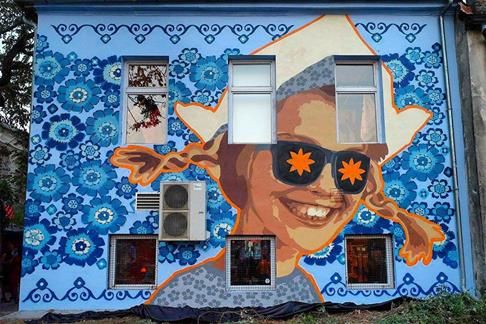 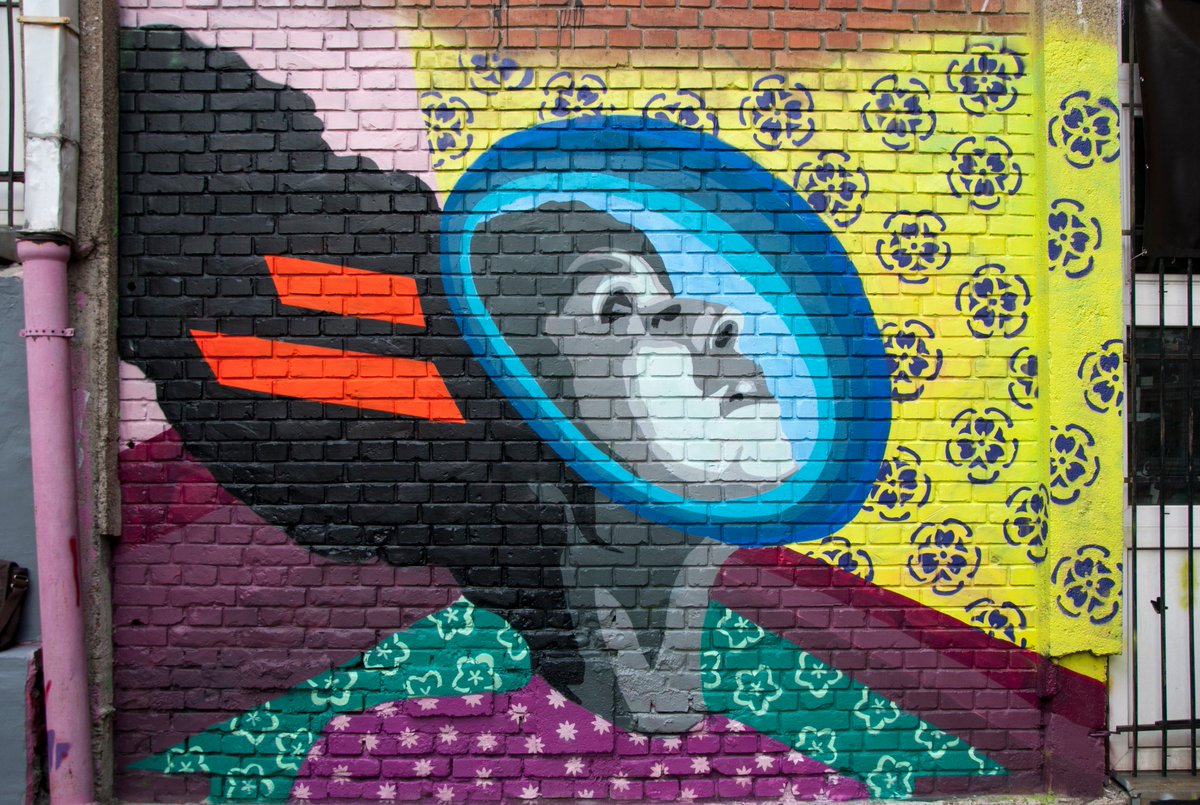 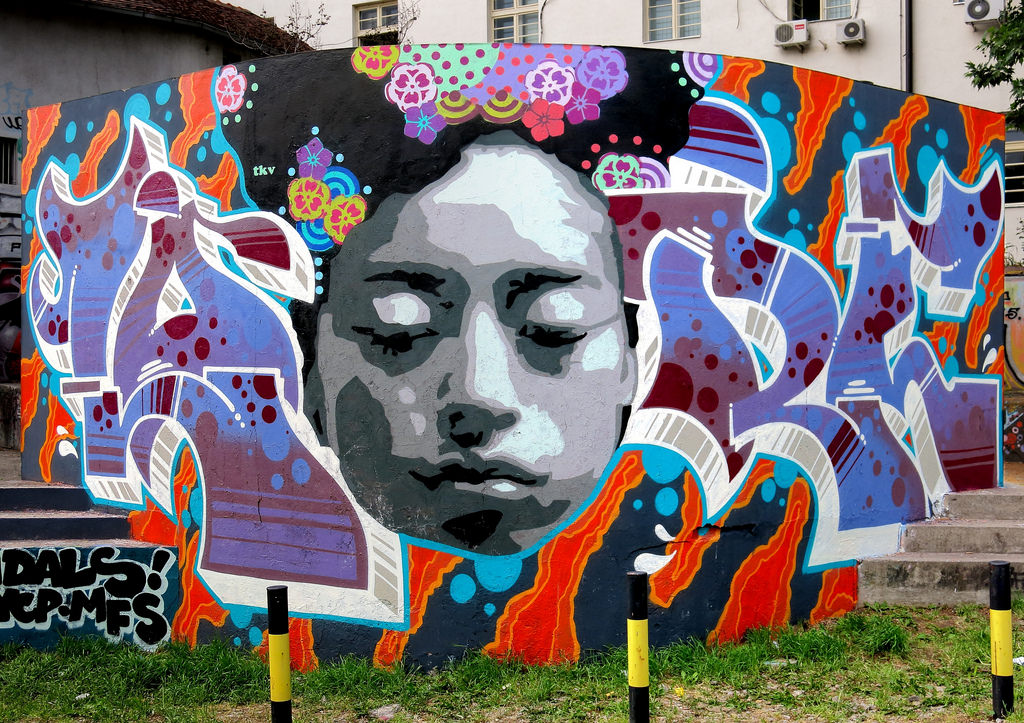 That Belgrade is artistic and cultural city, testify murals that are dedicated to many of our great actors. Many of them are also dedicated to the written words, to poems, etc. Today’s Belgrade have more than 50 beautiful murals, and we hope that more great ones are yet to come.